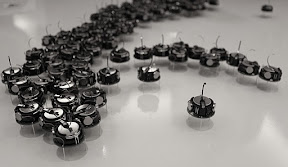 In current robotics research there is a vast body of work on algorithms and control methods for groups of decentralized cooperating robots, called a swarm or collective. These algorithms are generally meant to control collectives of hundreds or even thousands of robots; however, for reasons of cost, time, or complexity, they are generally validated in simulation only, or on a group of a few 10s of robots. To address this issue, we designed the Kilobot, a low-cost robot designed to make testing collective algorithms on hundreds or thousands (“kilos”) of robots accessible to robotics researchers. Each robot has the basic capabilities required for a swarm robot, but is made with low-cost parts, and is mostly assembled by an automated process. In addition, the system design allows a single user to easily and scalably operate a large Kilobot collective, such as programming, powering on, and charging all robots. systems.

We are now using the Kilobot swarm to investigate algorithms for robust collective behavior, such as collective transport, human-swarm interaction, and shape self-assembly, as well as new theory that links individual robot capabilities to acheivable swarm behaviors. See our publications and movies to learn more about this research.

The Kilobot won first place in the 2012 African Robotics Network $10 Robot Design Challenge. The goal of the AFRON challenge is to develop a low-cost robot for education in developing countries. The Kilobot design is available open-source for non-commercial use, and you can also purchase Kilobots from K-Team Corp. We are also developing new example programs and programming environments for using the Kilobot in research and education. See below for more details.

If you would like to build your own Kilobots, all the software and hardware details are available under a Creative Commons attribution-NonCommercial-ShareAlike 3.0 Unported (CC BY-NC-SA 3.0) license. The documents can be found here. The design is fairly simple for any lab that is used to getting electronics made, and this is a great and affordable option if you plan to make a large number of robots (We estimate approximately $20/robot for thousand, upto $50/robot for a hundred). If you decide to make your own robots, feel free to contact Mike Rubenstein to let him know and if you need help.

Kilobots use a standard microcontroller (Atmel) and its programming environment, and the distribution above contains the bootloader program, libraries, and some sample programs. But we are also now developing a new online programming environment www.kilobotics.com, that hosts compilation environment online and interfaces with dropbox to make the process of developing Kilobot programs more easily portable to different operating systems. We will also be developing new sample programs and labs to go with this environment. If you are interested in being a beta tester for this, contact Alex Cornejo.

This entry was posted in 未分类. Bookmark the permalink.